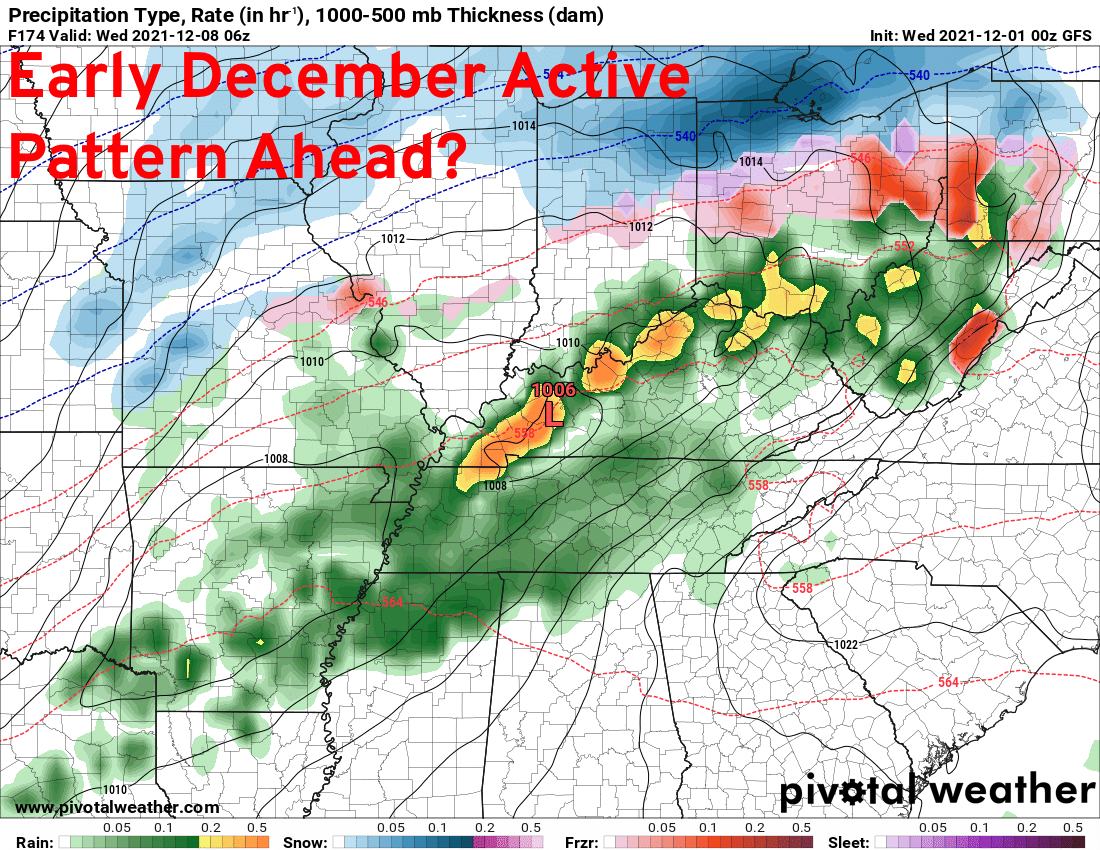 Happy Wednesday everyone. Forecaster Zach Battin here to give you a behind the scenes look at what looks to be a fairly active week starting this coming Sunday 12/5/2021.

As a general note, posts like these should not be considered a forecast and are simply looking at model trends and patterns to get a general idea of what we can expect during a given timeframe. You’ve been warned! 😄 Now on to the goods!

Our discussion begins Sunday afternoon / evening. We are pretty confident that a storm system will be moving across the region during the day on Sunday bringing mainly rain to most of us. The questions with this system are this:

While specifics are still difficult to nail down more than a couple days out in most cases we know that rain is expected. It would appear the more Norther track of the Low is expected so we should stay on the warm side of the system and remain all rain until the system pulls away late, leaving behind a couple snow showers for some.

Once this system moves out, colder air is expected to move in for the day on Monday and Tuesday with quiet weather expected Monday and most of Tuesday outside of some lake effect snow showers. Tuesday night into Wednesday is when system #2 moves in, bringing the potential for some snow accumulation. Again, the models with this system are pretty different, with the Euro showing a more Northern track leading to rain, while the GFS shows a Southern track bring rain, freezing rain/sleet, and snow across the state.

As you can see, both major models have the next system moving in Tuesday night / Wednesday morning, but the impacts are drastically different. If the GFS were to verify, I-70 (as usual) would be the dividing line between sleet/freezing rain and plain rain, while NW Ohio would see snow, NE Ohio Snow/Mix, and the rest of the state and West Virginia would see rain. The Euro model, with its more Northern track suggest all rain for the area, with maybe a mix close to far Northern Ohio, but most likely still rain.

To recap, here’s what we know: 2 systems will be moving in next week: Sunday and Tuesday night. Sunday looks most likely to bring rain and wind to the region, albeit not too much rain. The second system is still one to watch as there will be enough cold air in place to bring a wintery mix and some snow to the region!